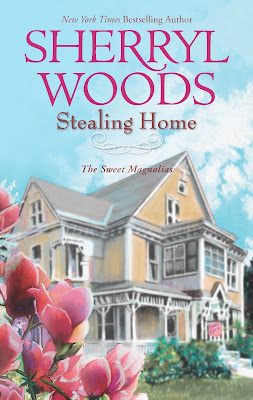 Single mom finds love on the diamond with a little help from her friends.
by Rich Watson

For almost forty years, Sherryl Woods has entertained readers with her Southern blend of romances and mysteries. A former journalist, she has written over a hundred ten books in a variety of series, under her own name and with the names Alexandra Kirk and Suzanne Sherrill.

In 2007, she started a new series called “Sweet Magnolias,” centered around a trio of best friends in a small Southern town, and the first book combined her love of romance stories with another interest: baseball.

If you have Netflix, perhaps you’ve noticed the book series was adapted into a TV series. Later this year I’ll discuss the show, but I thought I’d start with the source material.

Stealing Home is set in the fictitious town of Serenity, South Carolina. The Palmetto State has five real-life minor league baseball teams, all Class A:
Among the major leaguers who came up through SC-based teams include
The Pelicans were formerly the world-famous Durham Bulls of North Carolina, the team immortalized in the film Bull Durham. When Durham received a Triple-A team thanks to major league expansion, the single-A Bulls spent 1998 in Danville, Virginia as the 97s. They moved again in 1999, to Myrtle Beach, SC as the Pelicans. The new franchise in Durham assumed the original Bulls name.
At the collegiate level, the University of South Carolina, Clemson, and nine other teams play in Division 1. The USC Gamecocks have gone to the College World Series eleven times, with two consecutive national championships, in 2010-11. They hold the NCAA record for consecutive wins at twenty-two. Among their alumni include major leaguers
In addition, there’s a museum devoted to the notorious Shoeless Joe Jackson in Greenville.

In Woods’ book, the main character, Maddie, goes through a painful divorce after her husband Bill cheats on her and gets his new girlfriend pregnant. Maddie has three kids; her teenage son Ty plays high school baseball. When the divorce affects his play as well as his grades, his coach Cal takes an active hand in Ty’s struggle to cope.
Through Ty, Cal becomes part of Maddie’s new life without Bill. They grow close, but their relationship sets tongues wagging around town, to the point where Cal’s job security is in jeopardy, not to mention Maddie’s reputation.
Cal and Maddie’s relationship is a surprisingly chaste one. That’s due to both her insecurity over him being a decade younger and her unwillingness to damage her kids’ relationship to Bill.
Both of them try to do the right thing in protecting the kids by sublimating their growing passion for each other. The more time they spend together, however innocently, the more the townspeople draw their own conclusions as to what’s really going on.
The emphasis in Home is much more on the romance than the baseball. Cal is a former major leaguer who moved to Serenity to restart his career as a coach. Ty is a pitcher, with major league potential, who’s the star player on his team.
Games are seen through the filter of Cal, Maddie or Bill, but they’re brief. This was disappointing, but I was okay with that.
Besides, Woods has a different agenda with this book.

In an introduction to the paperback edition, Woods outlines her goal for Home and the series:

...As women, I think we’ve all come to understand that next to family, our friends are the most important people in our lives. And friendships that have stood the test of time, with women who know our history, our mistakes, our dirty little secrets and love us just the same, are the strongest bonds of all. Friends are there to boost our spirits when we’re having a simple bad day or a crisis of monumental proportions. They can make us laugh, celebrate with us, cry with us and remind us that even on the worst day life is still worth living.

Maddie’s best friends are Helen, a lawyer, and Dana Sue, a restauranteur. All three call themselves the “sweet magnolias” though Woods never goes into why.
The trio are like sisters. I kept expecting a certain level of conflict to arise between them as Maddie’s situation got more stressful and complex, but though they have their share of minor bickering, they support each other to a remarkable degree. Expect lots of hugs.
One subplot involves the three of them collaborating on the formation of a new women’s spa in town. Though initially she’s hesitant to be a part of it, Maddie’s involvement helps her get over the pain of her divorce. Helen and Dana Sue knew it would because they know her. Another writer might’ve looked for ways to pull them apart to generate more story tension, but not Woods.

The males in the story

Cal is pretty much the Ideal Man. He accepts Maddie unconditionally, bonds with her kids—though in Ty’s case he has to work harder to win him over—and stands up for her when it counts. I would’ve preferred him to be a little less perfect (not as great-looking, for instance?), but such are the ways of the genre.
I was more impressed with how Woods handled Bill. It would’ve been easy to cast him as the villain for walking out on Maddie and the kids in favor of a younger, hotter woman, and he would’ve deserved it.
Instead, Woods paints him with some sympathetic tones. He genuinely loves his kids. His perspective, however skewed, is not overlooked. (Even the “other woman” character reveals some nobility.) I would’ve liked to have known more about what led him astray to begin with.
As for Ty, he’s a good kid in a difficult position. Loyal to his mother, he’s resentful of his father’s infidelity to her, but he can’t completely shut Bill out of his life—nor does Maddie want him to. And Ty’s uncertain how to feel about the change in his relationship with Cal. Maddie struggles greatly with Ty.

Maddie gives lip service to how great it is living in a small town, but Serenity is the same place that turned on her when she tried to carry on a friendship, never mind an affair, with a new man. More than once, this city slicker wondered whether small-town life was all that and a margarita.
I have difficulty imagining how she’d get along with the same people who try to condemn her and Cal based on hearsay and speculation. But I guess that’s what the subsequent books in the series are for.
Woods’ writing is good, though at times the characters pontificate a tad too much. Bits of the dialogue felt on-the-nose and even redundant. Nothing that got in the way of my appreciation, though. Indeed, I admired her ability to juggle multiple subplots. Many of the Serenity folk (Serenitians? Serenites?)  have backstories of their own, and I had to pause at times to remember who was who.

The romantic lead was too idealized for my taste, and I would’ve liked more baseball, but overall Stealing Home was pleasant and worth reading.
———————
So those of you who know me from my previous blog know I’ve been writing a novel. Last month I met a couple of ladies who do a writers podcast, Meredith Bond and Pru Warren, and they were kind enough to critique the first page from my finished manuscript.
I hope to find an agent, and ultimately a publisher, soon. When I do, I’ll announce it here.
———————
Have you read Stealing Home?
at April 14, 2021